Mixed up and confused
Man keeps walking and searching
For mixed-up women.

"Mixed-Up Confusion" is Bob Dylan's first single, issued on the other side of the song "Corrina, Corrina." These two were the only songs from the sessions for the 1963 album "The Freewheelin' Bob Dylan" that were released with electric instruments backing him. The song feels like a conscious attempt at an easy-going hit single, though it didn't perform that way. The song is a compact lament:

1. I have mixed up confusion. It's killing me. It's hard to please so many people.
2. I'm walking around with my hat in my hand looking for a woman who's as mixed up as I am.
3. I have lots of questions and a fever. I don't know whom to ask for answers.
4. I'm still walking. Every time I see my reflection, "I’m hung over, hung down, hung up!"

The first commercially available version of the song after the single appeared was on the "Biograph" compilation in 1985. When the first volume of the "50th Anniversary Collection" came out, a copyright extension collection of songs from 1962, it included seven of the 11 takes of the song that Bob performed. They're all slightly different. I have included three takes here. 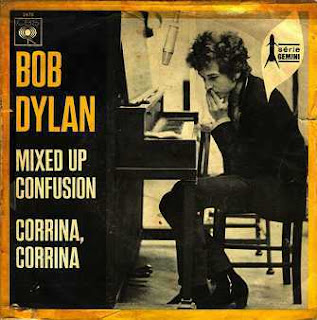