Bob's new pony is
Sexier than the last one.
He's gonna ride her.

I've heard a bizarre charge regarding this song: Dylan, that sexist, is comparing a woman to a pony, therefore he's a sexist. Let's leave that alone from the outset. There are plenty of songs that use animals as a metaphor for people, and sometimes in a sexual way, and when Dylan has expressed more caveman-like views toward women, he hasn't been shy about it (as much as I dislike it). "Ballad of the Absent Mare," "Milk Cow's Calf Blues," "Honeybee," "Closer to God" (I've noticed nobody ever gives Trent Reznor a hard time for his blunt and honest line, "I want to fuck you like an animal") and so on. The difference between those songs and this is Dylan's "naked" intent. He's singing about lust and sexual confusion, and the dirty, grinding blues of the song underlines his intent. It's one of his most raw songs, and I think it's effective. The blues guitar solo in the middle is rude and bad-ass, and is exceeded only by the nasty sound of the saxophone on the fade-out. The backup singers, sometimes off the beat, bellow, "How much longer?" in a terrifying way as Dylan growls through the verses, including his vocal fills, like "well-lllllll" and so on. I love this song. You can find it as track 2 on the 1978 album "Street-Legal." 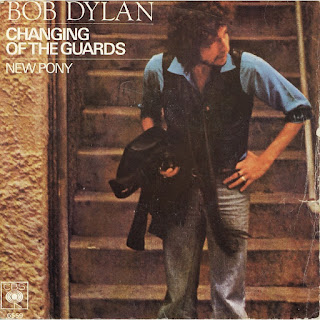 Posted by Robert MacMillan at 2:01 PM