Girlfriend with an edge:
She's above petty concerns
And she's very smart.

"Love Minus Zero/No Limit" is a lovely song done to death by interpretation and sugared cover versions. Bob Dylan's original, released on the 1965 album "Bringing It All Back Home," has just enough vinegar to save it from being just a pretty song. Still, I don't know anyone who wants to listen to a jot more about how someone else's girlfriend is the bomb. Having said that, I don't mind hearing David Byrne do it in the Talking Heads song, "Girlfriend Is Better," but that's another project for another day.

The qualities of Bob Dylan's girlfriend:
- Speaks like silence, without ideals and violence.
- She's faithful, but doesn't have to make a big thing of it.
- Unlke people with roses and false promises, she laughs like flowers and doesn't respond to Valentines.
- She knows failure is the biggest success -- AND YET -- the biggest failure.
- She speaks softly whereas other people (small people in small places) babble about what they read and come to their own conclusions (I highly doubt that this is a reference to Nebuchadnezzar and the writing on the wall)
- Departure from the song for the sake of adding some imagery to trip up college students and their professors: dangling cloak and dagger, madames with candles, ceremonies of the horsemen and grudge-holding pawns, matchstick statues crumbling together.
- Back to the point: His girlfriend is too smart to argue or judge.
- Again a departure: trembling bridge at midnight, rambling country doctor, bankers' nieces looking for Mr. Right as well as expecting unique and valuable gifts. Howling wind, rainy night, cold... and there she is again, at the window like a raven with a broken wing. (Some say it's about how she's vulnerable despite how cool she is. Sure. That's fine.) 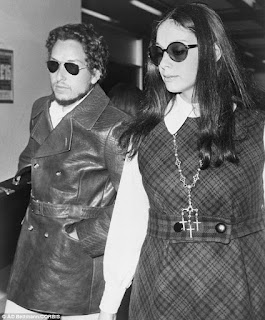 Posted by Robert MacMillan at 12:15 PM

Labels: 1965, Bringing It All Back Home, Love Minus Zero No Limit