He holds her hand
And kisses her lips and leaves
Her on the river.

This is an abbreviated performance that Bob Dylan played at Gerde's Folk City in 1963.

I held her hand
on a cobblestone corner,
I kissed her lips
by the river bridge
I said good-bye
with a night train rolling
on a lonesome day
by the lonesome river edge.

At that point, he segues into the song "Back Door Blues," covered here earlier. This is available on the rare second volume in the "50th Anniversary Collection" series. 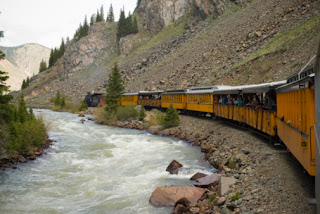 Posted by Robert MacMillan at 12:49 PM