A woman hurt him
He left her, but she haunts him.
Now he's going home.

There are variations on this song, of which Bob Dylan's is just one. The original, so far as can be determined, was by Dick Burnett, a fiddler from Kentucky who also was partially blind in the best tradition of mysterious folk and blues singers. This appeared on his 1962 debut and contains the usual topics that occupied Dylan at the time, and in some cases, up to now:

Through this open world I'm a-bound to ramble
Through ice and snow, sleet and rain
Im a-bound to ride that mornin' railroad
Perhaps I'll die upon that train

I'm a-goin' back to Colorado
The place that I've started from
If I'd knowed how bad you'd treat me
Babe, I never would have come 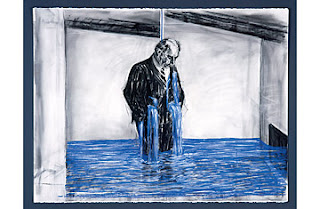 Posted by Robert MacMillan at 1:07 PM

Labels: 1962, Another Side of Bob Dylan, Man of Constant Sorrow