Jailed drunk tells his tale
Of dancing for booze money
And how his dog died.

"Mr. Bojangles" was a huge hit for Jerry Jeff Walker when he released it in 1968. There are tons of covers out there from all sorts of artists: Garth Brooks, Harry Belafonte, JJ Cale, Sammy Davis Jr., Neil Diamond, Arlo Guthrie, Whitney Houston, Billy Joel, Elton John, Rod McKuen, Nina Simone, William Shatner, Cat Stevens, Robbie Williams and Dolly Partner. I don't quite understand what makes it irresistible, but it's certainly unforgettable. I don't really like sympathetic songs about chronically stumbling drunks, and the story line is ridiculous, but it forces its nostalgia on me because this was a song that is inseparable from the 1970s when I was growing up. It also makes a naked grab for your emotions, and I hate it when the grab works. Each time I hear it, back I go. Dylan's version appeared on the 1973 album "Dylan," which contained studio recordings that he had not intended to release. Columbia released them anyway in a catty move after he decamped to David Geffen's Asylum Records. Whether they were intended to dent future sales because of their plainly substandard quality is unknown, at least to me. Having said that, and I've said this before, I like the album.

PS, here is the Wikipedia entry on Walker's inspiration for the song:
Walker said while in jail for public intoxication in 1965, he met a homeless white man who called himself "Mr. Bojangles" to conceal his true identity from the police. He had been arrested as part of a police sweep of indigent people that was carried out following a high-profile murder. The two men and others in the cell chatted about all manner of things, but when Mr. Bojangles told a story about his dog, the mood in the room turned heavy. Someone else in the cell asked for something to lighten the mood, and Mr. Bojangles obliged with a tap dance.

I knew a man Bojangles and he'd dance for you
In worn out shoes
With silver hair, a ragged shirt, and baggy pants
The old soft shoe
He jumped so high, jumped so high
Then he lightly touched down

I met him in a cell in New Orleans I was
down and out
He looked to me to be the eyes of age
as he spoke right out
He talked of life, talked of life, he laughed
clicked his heels and stepped

He said his name "Bojangles" and he danced a lick
across the cell
He grabbed his pants and spread his stance,
Oh he jumped so high and then he clicked his heels
He let go a laugh, let go a laugh
and shook back his clothes all around

He danced for those at minstrel shows and county fairs
throughout the south
He spoke through tears of 15 years how his dog and him
traveled about
The dog up and died, he up and died
And after 20 years he still grieves

He said I dance now at every chance in honky tonks
for drinks and tips
But most the time I spend behind these county bars
'cause I drinks a bit
He shook his head, and as he shook his head
I heard someone ask him please 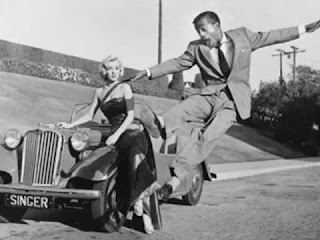 Posted by Robert MacMillan at 10:58 AM