Want to spot Satan?
Look for the best guy around.
It's probably him.

This can't be news to you by now, but as Bob Dylan said, sometimes Satan comes as a "Man of Peace." That's the name of this song from the 1983 album "Infidels." There's not much more to it than that, making this a masterpiece of brevity.

Attributes and avatars of Satan:
- The Fuhrer
- Local priest
- Man of peace
- Gift of gab
- Harmonious tongue
- Knows all the love songs
- Hands full of grease
- First he's in the background, then he's in the front
- He always looks like he's on a rabbit hunt
- The chief of police can't see through him
- He always shows up when you're looking for sunlight and a solution to your troubles
- You'd never suspect it was Satan standing next to you in a crowd
- Fascinating
- Dull
- Rides down Niagara Falls in a barrel made of your skull
- He's a cook
- He's a humanitarian
- He's a philanthropist
- He knows how to touch you and kiss you
- He has the tender touch of the beast
- He howls like a wolf and crawls like a snake
- He uproots old trees
- He specializes in coming after single people, so you had better get married.

Here is the studio version. 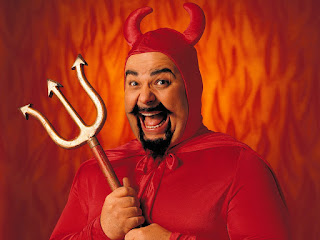