Man in the Long Black Coat

The man in the coat
Takes the woman away. She
Left without remorse.

Something about noisy bugs seems to bring out the literal in Bob Dylan. "Day of the Locusts" on the 1970 album "New Morning" begins with the sound of locusts. And on "The Man in the Long Black Coat" from the 1989 album "Oh Mercy" begins with the lyric, "Crickets are chirpin’, the water is high..." and indeed, you can hear the chirping of crickets as the song begins. The crickets don't do much more than set the scene here, which is an empty house where a woman once lived and doesn't live anymore.

As you can see:
There’s a soft cotton dress on the line hangin’ dry... Not a word of goodbye, not even a note, She gone with the man In the long black coat.

People who know their music say that she's the woman from the song "House Carpenter," which Dylan sang on earlier recordings. If you don't know the song, she's the woman who married a house carpenter and had a kid before her old lover returned and said, "come away with me and leave these people." She does so, but discovers only too late, once they're sailing on the sea, that he's come to take her to hell because he's actually a demon.

And now, a little more about the man in the coat:

- Spotted at the old dance hall on the outskirts of town
- She asked him to dance-
- Someone says he spouts Bible quotes
- She gives her heart to him.

Notes on sin:
- The preacher says the conscience of men is vile and depraved, and you can't depend on it for guidance because you have to guide it in turn.

Notes on life:
- Some say there are no mistakes in life. You can look it that way... if you want.
- Some people drift through life instead of living or dying. 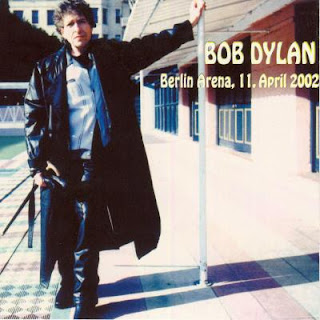 Posted by Robert MacMillan at 12:58 PM