She's like salvation
And Bob needs her pretty bad,
Maybe more than God.

In the midst of his Christian music period, Bob Dylan wrote "Need a Woman." Copyrighted in 1982, the song appeared on the first volume of the bootleg series in 1991. He avoids the God theme for most of the song, though suggests to her toward the end that religious belief is a private matter, quite the opposite of what he had been practicing in those years:

"Well, believing is all right, just don’t let the wrong people know what it’s all about
They might put the evil eye on you, use their hidden powers to try to turn you out."

His situation:
- Patience wearing thin, fire in his nose
- Searching for truth the way God designed it, though he might drown before he finds it 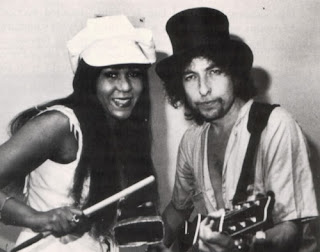 Posted by Robert MacMillan at 2:06 PM