I wish you loved me.
You're painting the town red and
I'm painting it blue.

"Mr. Blue" is a song by the Fleetwoods from 1959. It's one of those songs that epitomizes white "rock and roll" that seemed, at least to me, to be a reaction by the music industry to white radio listeners who thought that Elvis and Jerry Lee were too raunchy and "black" in their raucous rock and roll. Bob Dylan covered the song with the Band in the Basement Tapes sessions of 1967. The song was written by Dewayne Blackwell. His other songs include "I'm Gonna Hire a Wino to Decorate Our Home," recorded by Dave Frizzell, and "Friends in Low Places," made famous by Garth Brooks. Dylan's version is surprisingly straight, given the hoot of derision that you can hear from one of the Band's members in the background when he starts to play it. You can find this on volume 11 of the Bootleg Series. 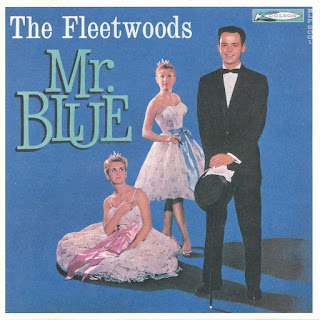 Posted by Robert MacMillan at 10:47 AM