Right-wing farmer hosts
Bob for the night. Saucy
Daughter flirts with him.

"Motorpsycho Nitemare" is Bob Dylan's extended joke on the traveling salesman/suspicious farmer/sexy daughter story, blended with a few plot elements from Alfred Hitchcock's "Psycho," Fidel Castro's beard, and the Communist witch hunts in America during the prior 10 years to the song's release. Dylan also drops in a Fellini/La Dolce Vita reference. The song appeared on the 1964 album "Another Side of Bob Dylan."

I pounded on a farmhouse
Lookin’ for a place to stay
I was mighty, mighty tired
I had come a long, long way
I said, “Hey, hey, in there
Is there anybody home?”
I was standin’ on the steps
Feelin’ most alone
Well, out comes a farmer
He must have thought that I was nuts
He immediately looked at me
And stuck a gun into my guts

I fell down
To my bended knees
Saying, “I dig farmers
Don’t shoot me, please!”
He cocked his rifle
And began to shout
“You’re that travelin’ salesman
That I have heard about”
I said, “No! No! No!
I’m a doctor and it’s true
I’m a clean-cut kid
And I been to college, too”

Then in comes his daughter
Whose name was Rita
She looked like she stepped out of
La Dolce Vita
I immediately tried to cool it
With her dad
And told him what a
Nice, pretty farm he had
He said, “What do doctors
Know about farms, pray tell?”
I said, “I was born
At the bottom of a wishing well”

Well, by the dirt ’neath my nails
I guess he knew I wouldn’t lie
“I guess you’re tired”
He said, kinda sly
I said, “Yes, ten thousand miles
Today I drove”
He said, “I got a bed for you
Underneath the stove
Just one condition
And you go to sleep right now
That you don’t touch my daughter
And in the morning, milk the cow”

I was sleepin’ like a rat
When I heard something jerkin’
There stood Rita
Lookin’ just like Tony Perkins
She said, “Would you like to take a shower?
I’ll show you up to the door”
I said, “Oh, no! no!
I’ve been through this before”
I knew I had to split
But I didn’t know how
When she said
“Would you like to take that shower, now?”

Well, I couldn’t leave
Unless the old man chased me out
’Cause I’d already promised
That I’d milk his cows
I had to say something
To strike him very weird
So I yelled out
“I like Fidel Castro and his beard”
Rita looked offended
But she got out of the way
As he came charging down the stairs
Sayin’, “What’s that I heard you say?”

I said, “I like Fidel Castro
I think you heard me right”
And ducked as he swung
At me with all his might
Rita mumbled something
’Bout her mother on the hill
As his fist hit the icebox
He said he’s going to kill me
If I don’t get out the door
In two seconds flat
“You unpatriotic
Rotten doctor Commie rat”

Well, he threw a Reader’s Digest
At my head and I did run
I did a somersault
As I seen him get his gun
And crashed through the window
At a hundred miles an hour
And landed fully blast
In his garden flowers
Rita said, “Come back!”
As he started to load
The sun was comin’ up
And I was runnin’ down the road

Well, I don’t figure I’ll be back
There for a spell
Even though Rita moved away
And got a job in a motel
He still waits for me
Constant, on the sly
He wants to turn me in
To the F.B.I.
Me, I romp and stomp
Thankful as I romp
Without freedom of speech
I might be in the swamp 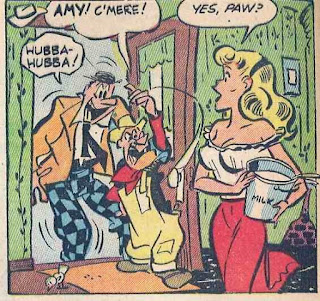 Posted by Robert MacMillan at 11:41 AM

Labels: 1964, Another Side of Bob Dylan, Motorpsycho Nitemare