Never Gonna Be the Same Again

Woman changes man,
And he stays changed even when
She breaks up with him.

"Never Gonna Be the Same Again" is an unfairly ignored song on a throwaway album, "Empire Burlesque" from 1985. Producer Arthur Baker was seeking a big, electric '80s sound to make Dylan sound more modern for contemporary audiences and hopefully the resulting album sales. It didn't work out that way, and people generally don't like most of the songs from this period. This song is one of my favorites from that period, though. The backup singers add serious punch, particularly at the fade as they and Dylan improvise on the vocals -- "You're too hot, baby," "Come on, darlin'" etc. It fairly swings as it makes it exit. The lyrics are so so, but what can you do...

As for the haiku, there's no point at which Dylan says that they're not together anymore. He even says "Now you're here beside me, baby... And every time you get this close, it makes me want to scream." Hideous lyric, but the implication is that she's there. Same for "You give me something to think about, baby, every time I see you. Don't worry, baby, I don't mind leaving, I'd just like it to be my idea." But he consistently sings about other things in the past tense: "You touched me," "Sorry if I hurt you baby," "But you meant more than everything," "You taught me how to love you," "Now I can't go back to what was, baby, I can't unring the bell," "You took my reality and cast it to the wind..." To me, that implies that he's been forever changed, even though she might be gone. And that's my argument for the haiku, probably more than it deserves. 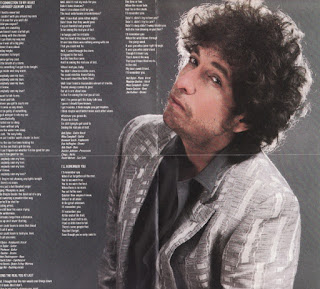 Posted by Robert MacMillan at 12:50 PM