Trust me when I say
You can find safer jobs than
Buffalo hunting.

"Hills of Mexico" is known by other titles and variations, notablly "Trail of the Buffalo" or "On the Trail of the Buffalo" or "Buffalo Skinners." It's an old 19th century song warning of the hazards of going buffalo hunting, which was such a big business that we managed to kill most of them and break the back of the Native Americans. Dylan's version was recorded during the 1967 Basement Tapes sessions with the Band.

Here are the lyrics, of which there are plenty of other versions. These are from the Woody Guthrie version:

Come all you jolly skinners, and listen to my song,
There are not many verses, it will not detain you long:
It's concerning some young fellows who did agree to go
and spend one summer pleasantly of the range of the buffalo.

'Twas in the town of Jacksboro in the spring of Sev'nty three,
A man by the name of Crego came stepping up to me,
Saying, "How do you do, young fellow, and how would you like to go
And spend one summer pleasantly on the range of the buffalo?"

"It's me being out of employment, this to Crego I did say:
"This going out on the buffalo range depends upon the pay.
But if you will pay good wages and transportation, too,
I think, sir, I will go with you to the range of the buffalo."

"Yes, I will pay good wages, give transportation, too,
Provided you will go with me and stay the summer through:
But if you should grow homesick, come back to Jackboro,
I won't pay transportation from the range of the buffalo."

It's now our outfit was complete - seven able-bodied men,
With navy six and needle gun - our troubles did begin:
Our way it was a pleasant one, the route we had to go,
Until we crossed Pease River on the range of the buffalo.

It's now we've crossed Pease River, our troubles have begun.
The first dam tail I went to rip, Christ! How I cut my thumb!
While skinning the dam old stinkers our lives they had no show,
For the Indians watched to pick us off while skinning the buffalo.

He fed us on such sorry chuck I wished myself most dead,
It was old jerked beef, croton coffee and sour bread.
Pease River's as salty as hell fire, the water I could never go -
O God! I wished I had never come to the range of the buffalo.

Our meat it was buffalo hump and iron wedge bread,
And all we had to sleep on was a buffalo robe for a bed:
The fleas and graybacks worked on us, O boys, it was not slow,
I'll tell you there's no worse hell on earth than the range of the buffalo.

Our hearts were cased with buffalo hocks, our souls were cased with steel.
And the hardships of that summer would nearly make us reel.
While skinning the damned old stinkers our lives they had no show.
For the Indians waited to pick us off on the Hills of Mexico.

The season being near over, old Grego he did say,
The crowd had been extravagant, was in debt to him that day,
We coaxed him and we begged him and still it was no go -
We left old Crego's bones to bleach on the range of the buffalo.

Oh, it's now we've crossed Pease River and homeward we are bound,
No more in that hell-fired country shall ever be found.
Go home to our wives and sweethearts, tell others not to go,
For God's forsaken the buffalo range and the damned old buffalo.

Here's a version I like by the late electronica-turned-folk musician Frank Tovey (AKA Fad Gadget). It's from his wonderful 1988 album "Tyranny and the Hired Hand." 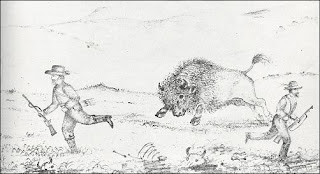 Posted by Robert MacMillan at 3:43 PM