I Dreamed I Saw St. Augustine

Augustine frees souls,
But people don't like that, so,
Of course, they kill him.

Another jack-in-the-box song from 1967's "John Wesley Harding" album, "I Dreamed I Saw St. Augustine" stuffs plenty of material into a short song.

1. St. Augustine: alive, frenzied and miserable. He has his blanket (a wandering mendicant?) and a coat of gold (spiritual riches?). He's looking to save souls, but they've been sold.
2. He tells the rich: You have no martyr to make your saint, so keep doing your thing, but know that you're not alone. I'm assuming that he means he is prophesying his death at their hands.
3. Bob dreams that he's one of the people to put the saint to death. Bob wakes up, alone and terrified. He cries.

I could have written 20 haiku from different angles, but I settled on this one alone. Maybe another time I'll try again.

The real St. Augustine of Hippo was born on November 13, 354 and died on August 28, 430. Seventy-six years old, and he wasn't martyred. The Chrstian theologian and philosopher died at the age of 76 during the Vandal siege of Hippo in Roman Africa. He asked the church library that his books be preserved. The Vandals must have had some idea of this. It is said that they lifted the siege, but later came back and burned the city to the ground -- except for his cathedral and library. As far as other notable Augustines, the first archbishop of Canterbury was named Augustine. He died in 604, and was not martyred. There was one martyred St. Augustine, however. The prior of Our Lady of Melwood in Epworth, Lincolnshire, was Augustine Webster. He and three other Carthusians were tried and executed for refusing to take the Oath of Supremacy under Thomas Cromwell -- hanged, beheaded and quartered. Pope Paul VI canonized him. (Cromwell got his later because of his various backroom machinations that eventually backfired. King Henry VIII had him beheaded in 1540 on the same day that he married Catherine Howard. His head was put on a spike and set on London Bridge for everyone to see. Henry later regretted the decision, saying that his ministers put him up to it by giving him slanted information) 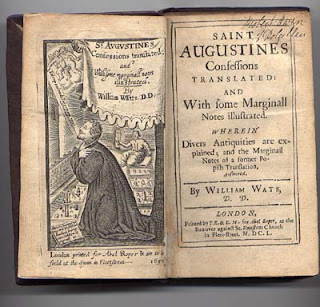 Posted by Robert MacMillan at 1:48 PM