John Brown goes to war
And gets himself blown to bits.
How proud is Mom now?

"John Brown" is a grim tale penned by Dylan in 1963 about a boy who makes his mama proud by enlisting and going to war. She doesn't know quite what to do when he comes home disfigured by injury, but clutching all those medals that she was hoping that he would win. The song appeared at the time under the pseudonym Blind Boy Grunt on a Broadside Ballads release. Its first appearance on a Dylan album was on 1995's "MTV Unplugged." Further versions have surfaced on commercial releases since then.

1. John Brown goes to war in his nice new uniform.
2. Mom says, go win lots of medals.
3. Mom tells everyone her son's going to be a war hero.
4. She gets letters from the front.
5. Letters stop.
6. She get a letter saying Johnny's coming home. She goes to the train station.
7. She can't find him because she doesn't recognize him.
8. Face shot up, hand blown off, metal brace on his waist. He can't talk properly.
9. What have they done to you?
10. You didn't see what I saw.
11. What am I doing in this war? I tried to kill my enemy, but he looked just like me.
12. As soon as I realized that this was bullshit, I was hit by a cannonball and went blind.
13. He gives his medals to his mother and walks away. 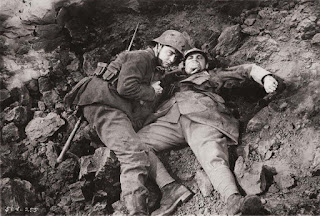 Posted by Robert MacMillan at 4:11 PM