We had some good times,
But I'd much rather focus
On hating you now.

"Idiot Wind" is the most downright bitter breakup song I've ever heard, but the breakup part is the only part that fits in the haiku. It's nearly eight minutes of anger, rage, betrayal, scorn, and eventually an acknowledgment that the singer is just as much of an "idiot" as the person at whom the song is directed. The intensity of the lyrics and Dylan's vocal delivery, coupled with the other unhappy songs on 1975's "Blood on the Tracks" album, don't make for much of a light listen, but it sure is thrilling. "Idiot Wind" in particular goes beyond the breakup into a world of disgust at the state of humanity and, in my reading, a despairing cry by Dylan at being misunderstood after 12 years of trying to sing his heart out.

1. Press paranoia: reporters are writing lies about him. One is that he shot a man and took his wife to Italy and inherited her money when she died. He's just lucky, not calculating.
2. People lose their shit when they're around me. Big ideas, images, distorted facts. Someone asks Bob "where's it at?" Seriously? He hasn't been able to answer that question ever. As he noted in "Ballad of a Thin Man," "You know something is happening here, but you don't know what it is."
3. Fortune teller: lightning might strike you. He can't remember peace and quiet. Then we get into the symbols: Lone soldier on the cross, smoke pouring out of a train door. Soldier loses every battle, wins war.
4. Bob dreams by the roadside: visions of her horse hurt his head. Then there's you, whoever you is: hurts the ones he loves best, lies. One day "you" will be in the ditch with flies around your eyes and blood on your saddle.
5. Gravity and destiny destroy them. She tames "the lion in his cage," but that didn't move his heart. Everything's upside down -- good/bad/bad/good. Top/bottom/bottom/top.
6. You're blinded by corruption and ritual. I can't face you. More symbols: priest in black on Sunday, no emotion as building burns. Bob waits for you near cypress trees, all summer long.
7. Strong lyrics among strong lyrics: "I can't feel you anymore, I can't even touch the books you've read. Every time I crawl past your door, I been wishin' I was somebody else instead." She's full of glory, he can't escape her memory.
8. Free after much double crossing. "I kissed goodbye the howling beast on the borderline which separated you from me." He complains about how she'll never understand his pain. He admits that he could have done better trying to understand hers.

Where the idiot wind blows:
- Down the backroads heading south
- Through the curtains in your room
- From the Grand Coulee Dam to Washington, D.C.
- Through the letters that we wrote.
- Through the dust on our shelves.

I know I play it light, but there's no other choice. "Idiot Wind" is too strong, too much. It's the irrational hurt of pain that's too close behind and too soon wrought. It also carries the feeling of a summer wind in the country, but not one that can bring any joy because of the terrible state of the singer. And though it is supposedly a personal song, I think that anyone who has been through tough human times can own these lyrics.

Here is, in order, the version that appeared on the album, the even more wounding, bitter, bleak version that he nearly released but held back, and a loud loud loud live version from the 1976 live album "Hard Rain." 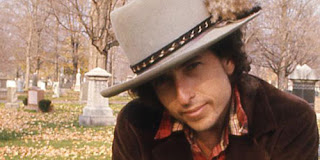 Posted by Robert MacMillan at 7:21 PM