If You Gotta Go, Go Now (Or Else You Gotta Stay All Night)

He gives her options:
He'll let her leave, but if not,
He gets to do her.

This is Dylan doing his version of the guy who corners the girl at a party and puts one hand up against the wall so she has to duck under his arm to leave. "If You Gotta Go, Go Now (Or Else You Gotta Stay All Night)" is a 1965 song that was left off the album "HighWay 61 Revisted," but released as a single along with "To Ramona," but only in the Netherlands -- and two years later. The song eventually saw wide release in 1991 in the first edition of the Bootleg Series.

The song is essentially a sales pitch for a booty call:

1. I want to be with you IF you want to be with me.
2. You can go if you must, but if you stay, you can't leave until morning.
3. I don't know what time it is, but you keep asking me. I don't have a watch.
4. I have plenty of respect for you, of course. Don't think otherwise.
5. I would feel really bad if you stayed here against your will.
6. I wouldn't ask you for anything you haven't given me already. And anyway, I'm tired and should go to sleep soon, so if you stay but want to go before you've stayed all night, it'll be too dark for you to find the door.

There are various other versions of this song running around out there too. 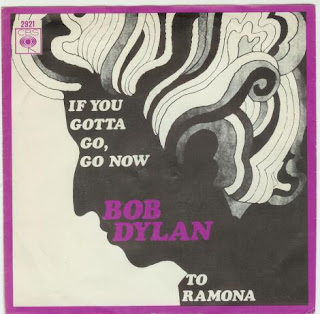 Posted by Robert MacMillan at 4:27 PM