Despite evidence,
People failed to recognize
Jesus as special.

"In the Garden" is one of the more earnest songs on "Saved," the 1980 album that forms the middle of his born-again Christian trilogy. The album has a few gospel moments that truly rock. Note songs such as "A Satisfied Mind," "Saved," "Solid Rock" and "Are You Ready?" "In the Garden" is one of those moments that builds and builds like some Richard Strauss tone poem, and it does so one solid, plodding step at a time. The song is a series of rhetorical questions that, collectively, tell you all about the losers who failed to believe that Jesus was the messiah. Songs like this are what gave Dylan a bad reputation among people who couldn't understand why he turned into such a sourpuss over Jesus.

1. When the Jews (or Romans, depending on your gospel of choice) came to arrest Jesus, did they know he was more than just some funky carpenter with a long beard and a bunch of hippies following him?
2. Did they know he was the son of God?
3. Did they understand why he told Peter to put away his sword?
4. Did people understand him when he spoke in the city?
5. Did people see him heal blind and crippled people?
6. Did anyone dare speak against him?
7. Why did he slip away to Gethsemane instead of accepting his crown?
8. Did people believe him when he rose from the dead? 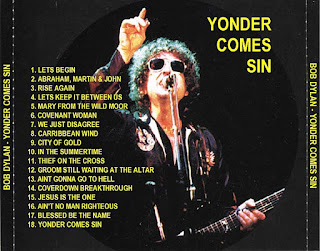 Posted by Robert MacMillan at 3:02 PM