I Believe in You

Bob's credit in God
Debits him big-time on earth,
But he doesn't care.

"I Believe in You" is Christian slow-dance music from the 1979 album "Slow Train Coming." The song is Dylan's prayer to Jesus or God, a reminder that he doesn't mind if everyone thinks he's cracked because he became a Christian.

1. Is his love real? They frown. They don't want him in town.
2. They kick him out, say don't come back. He walks all alone.
3. He believes in you through tears, laughter, separation, close to dawn and all the time.
4. Keep him close by, don't get him drift. He's in your debt and doesn't mind though it costs him.
5. He believes in you through different seasons and colors and despite being unpopular, and even if his friends leaves him.
6. He asks you to make sure he keeps feeling this way and aloof from the madding crowd. He's fine with the pain and rain as he will sustain... 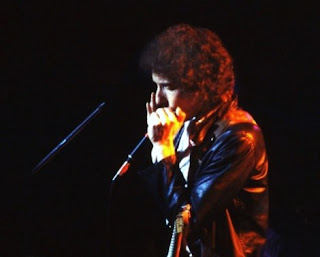 Posted by Robert MacMillan at 6:20 PM