Johnny Todd went to sea.
He left his girl, and she
Married someone else.

Here's an old ballad for the boys that took a notion to go wandering and leave their girls behind. I'm guessing that Dylan heard it from the Clancy Brothers and Tommy Makem. He recorded it with the Band during the 1967 Basement Tapes sessions, and you can hear it on volume 11 of the Bootleg Series.

Johnny Todd he took a notion
For to cross the ocean wide.
There he left his true love a-weeping
Waiting by the Liverpool tide.

For a week she wept full sorely,
Tore her hair and wrung her hands
Till she met with another sailor
Walking on the Liverpool sands.

O fair maid why are you weeping
For your Johnny gone to sea?
If you'll wed with me tomorrow
I will kind and constant be.

I will buy you sheets and blankets,
I'll buy you a wedding ring.
You shall have a gilded cradle
For to rock you baby in.

Johnny Todd came home from sailing,
Far across the ocean wide,
There he found that his fair and false one
Was another sailor's bride.

So, all you lads who go a-sailing
For to fight the foreign foe.
Never leave your true love like Johnny,
Marry her before you go!


The British TV series "Z-Cars" used the music as its theme. 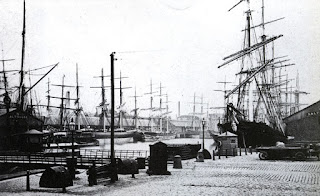