Lily, Rosemary and the Jack of Hearts

This epic robbery, lust and revenge story from the 1975 album "Blood on the Tracks" feels to me like it could have contained a few more verses to explain what on earth is going on. But continuity isn't the point, it's atmosphere that Bob is going for here. In short:

- The Jack of Hearts and his boys are robbing the bank safe located two doors down from the gambling hall/saloon in an old western town. They're not even bothering to hide the noise they're making. Presumably everybody has something else on their minds. Most people are getting ready for the show that's going to happen in the saloon that night.
- And how people do have other things going on... Lily's hanging out with the girls backstage, playing cards. She came from a broken home and had plenty of affairs with plenty of men, but nobody like the Jack of Hearts.
- Then there's Big Jim. He owns the diamond mine and is a richie-rich about town. He's having an affair with Lily. He's also concerned about this Jack of Hearts fellow, but he's not sure why.
- The stage manager knows that something strange is happening, but he can't rouse the hanging judge, becuase the hanging judge is drunk. He runs into the lead actor, dressed as a monk.
- Big Jim's wife Rosemary wants out of her marriage. She's depressed and has contemplated suicide and done other bad things. She's looking to do one good deed before dying. She's also a drunk.
- The hanging judge: another drunk, but he's not drunk after the burglary ends and Jack flees town. Ultimately, he solves everybody's problems. Jack busts out at gunpoint, Rosemary drops Jim with her knife, the judge sobers up in time to send Rosemary to the gallows, and Lily is left alone with her thoughts. 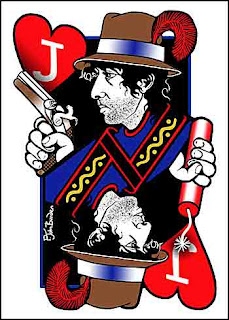 Posted by Robert MacMillan at 12:05 PM

Labels: 1975, Blood on the Tracks, Lily Rosemary and the Jack of Hearts