Mankind hurts the earth.
Space travel, lies and deceit
Will destroy us all.

"License to Kill" is one of those songs that shows off Bob Dylan in his cranky old man outfit, though he was in his early 40s when he released this song on the album "Infidels." He inveighs against the space race, general human mistreatment of well meaning people, world distruction, lies and the usual assortment of things that were on his mind at the time.

1. Oh, man has invented his doom
First step was touching the moon

2. Now, they take him and they teach him and they groom him for life
And they set him on a path where he’s bound to get ill
Then they bury him with stars
Sell his body like they do used cars

3. His brain has been mismanaged with great skill
All he believes are his eyes
And his eyes, they just tell him lies

4. Oh, man is opposed to fair play
He wants it all and he wants it his way

All the while there's this woman who lives on Bob's block and who appears in the chorus. She keeps asking who will take away the license to kill that belongs to this man who's been lied to and acts the way he has been groomed. I would if I could.

Here's a version that Dylan performed on the David Letterman show:


And the studio version, which is nothing like it: 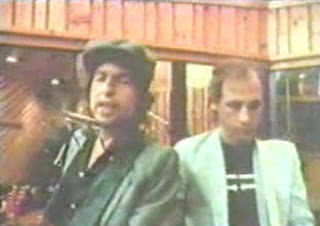