Police frame boxer
For murder while the bad guys
Get away with it.

The story of the wrongful imprisonment of middleweight boxer Rubin "Hurricane" Carter is well known to many younger people because of the Norman Jewison film starring Denzel Washington as Carter. Dylan's version, which opened the 1976 album "Desire," remains well known long after the events took place. It's not a work of journalism -- there are omissions and elisions, but it still had the effect of telling the world about Carter's wrongful imprisonment.

A short reminder:
Carter was charged with a triple murder at a bar and grill in Patersonm, New Jersey in 1966 and sent to jail. A second trial produced a guilty verdict and a sentence of two consecutive life terms. In 1985, a judge ruled that Carter did not receive a fair trial, and that racism was to blame. The prosecution in 1988 declined to seek a third trial, and a Superior Court judge dropped the charges. 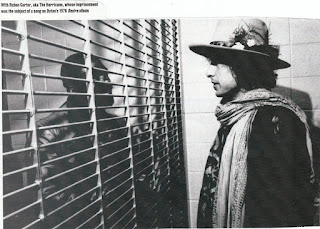 Posted by Robert MacMillan at 1:16 PM