Tough gunfighter dies,
But first he turns back into
An old mama's boy.

This quickie recorded for Sam Peckinpah's 1973 film "Pat Garrett and Billy the Kid" improbably turned into one of the most-covered and best-known songs that Bob Dylan ever wrote. The song appears in the original theatrical version when James Coburn, playing Pat Garrett, hops along with old buddies Katy Jurado and Slim Pickens to get some information on the whereabouts of Billy (Kris Kristofferson). The mission doesn't go as planned, and Slim takes a fatal bullet. His gun-toting wife Katy sits by his side as he dies, and this song plays over the scene of his expiration by the river, the angry clouds and the fading sun glowering in the distance. It's a strong scene, though Peckinpah's "preview" version that, to me, is the superior cut of the film, leaves out the vocals. Leaving the film aside, it's a request to his mother:

The haiku refers to the song, not the song as it appears in the film. Pickens's character goes out like a man, not an old mama's boy. 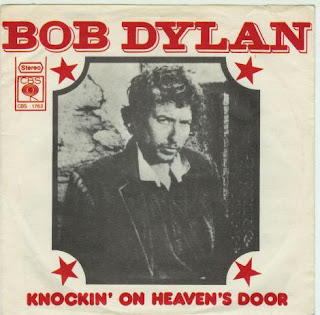 Posted by Robert MacMillan at 11:14 AM