Cops chase man from town.
He messed around with a girl.
He thinks she'll miss him.

"Kingsport Town" is a 1962 song from the sessions for "The Freewheelin' Bob Dylan." The song didn't make the album, and was released in 1991 on the first edition of the Bootleg Series. The story is simple yet obscure:

1. It's winter, a man is on the run and cold. He's thinking of a girl.
2. Does she remember him? She's the reason he had to leave Kingsport and the reason that the police are chasing him.
3. They're chasing him because he fell for her.
4. Who's going to stroke her black hair and sandy skin and kiss her "Memphis lips?"
5. Who's going to walk by her side and reassure her? Who's going to be her man and look her in the eye and hold her "bad-luck hand?"
6. Damn, it's cold out. 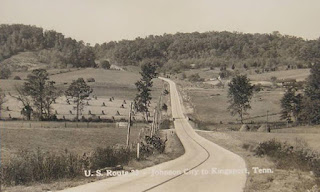 Posted by Robert MacMillan at 10:59 AM