He's a wanted man,
Armed too. But poor folks love him,
And he’s innocent.

The real John Wesley Hardin (no "g" at the end) was a lawbreaker in many ways. Murder, horse theft, helping prisoners escape, and so on... but Dylan's character is more of a Robin Hood who is wanted for crimes that he did not commit. "John Wesley Harding" is the first song of the album of the same name that Dylan released in 1967, and sets the tone for the rest of the album, with its meanderings through the Old West, Appalachia and other dark, lonely and highly allegorical corners of the old, rural, wild America. Dylan's Harding is the idealized lawbreaker in that he's just, prefers easy solutions to sticky situations, and earns the respect of the people even as he lives outside the law. It's no surprise that some Dylan scholars have noted that JWH is a lot like the Hebrew "Yahweh."

1. Friend to poor
2. Gun in "every" hand
3. He was a thief
4. He didn't hurt anyone
5. In Cheney County
6. Had his lady with him
7. There was a confrontation, but everything got straightened out
8. He was always ready to help people
9. Police sent notices of him across the telegraph
10. No charge stuck
11. Nobody could catch him
12. He never made a foolish move 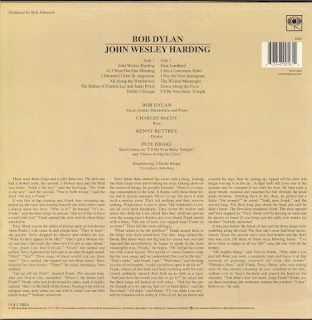 Posted by Robert MacMillan at 4:48 PM